In a live stream application, the live stream studio viewController is the most intricate page where there are lots of configurable widgets of kinds of businesses. In my past experience of working, I met that there are nearly 100 widgets on one page and more than ten different types of studio pages. Hence, the code of this page will hard to maintain and sustainable develop, even cause software disaster of management, if only one viewController manages all business logic. But it’s the true about our project, which more than 20,000 lines code was written in one file, before I refactored it. It was very terrible.

Indeed, the live stream page is very complex, so it need to be carefully analyse. The studio businesses could be classified according to their types:

Otherwise, there are massive functions in a studio page and some of them are decided to show or not by server configuration:

But some basic and abstract functions are common to these types.

These foundational works should have been done in a core business class rather than mixed with other more specific functions in one class. So, next part I’ll talk about my main idea about re-design this studio page.

A widget may be a button, a list, a docker, a dialog box or an animation. In some cases, it is a View providing touching and gesture; in other cases, it is a Layer. Thus, a widget should just met some common protocol and could be plugged in studio’s certain position. A good design of widget API should be simple and not care developer’s own implementation.

So, I defined a StudioWidgetProtocol including several basic and common methods for a widget. In this way, all widgets could be regarded as instances of id. The group members didn’t need to modify too much pieces of code to adapt the new architecture, just implemented serval necessary interface methods.

You can consider a widget as a node, it could be plugged in a container view or father widget and have own children. Besides, the level as sort of priority is introduced to this interface, which could be defined as an arranged way in certain order, such as Z axis arrangement and from left to right. The frame of widget shouldn’t be considered in this interface, the business group members should operate it and implement other inner logic in widgets’ own classes. The studio is merely responsible for adding them on proper levels and deals with the relations between widgets and studio.

However, I know that many colleagues prefer to use View as a widget in general situations, therefore I provided a StudioWidget class which has implemented StudioWidgetProtocol and added a bool switch, isGesturePenetrate, in case some gestures are intercepted by widget. 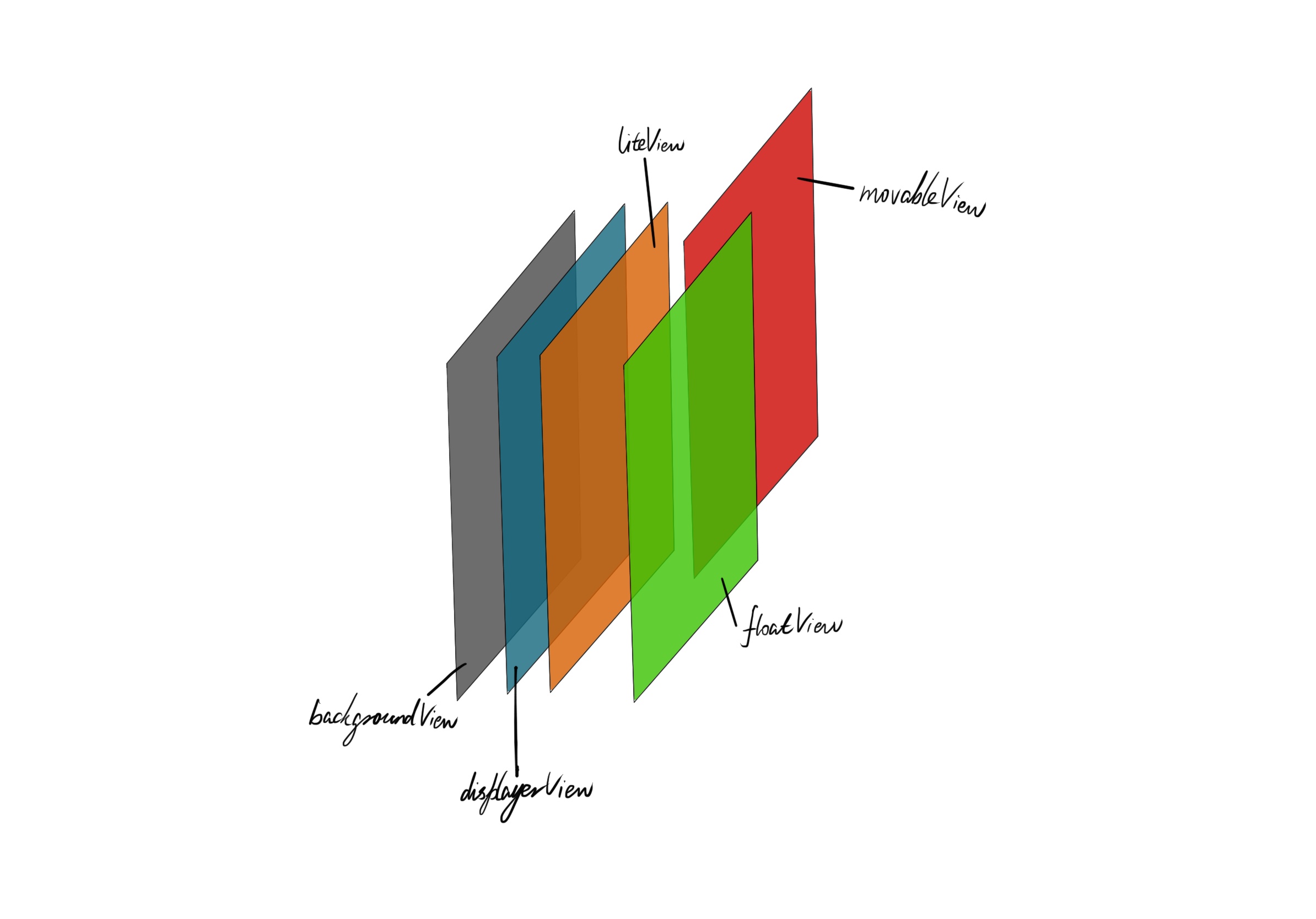 The studio could be neatly divided into five layers on Z axis based on studio’s function. From bottom to top, they are:

3. How to process events of widgets and studio?

There are two solutions about event transmitting in front of me, with the unique message bus and the broadcast of peer to peer. Let’s see the advantages and disadvantages about both of them.

Finally, I prefer to the latter one. I expanded the StudioWidgetProtocol to StudioWidgetProvider which claimed eventAnnouncer, and every studio has an eventAnnouncer as well. An eventAnnouncer hold up a hash table to collect all listeners. Once an event is triggered, the listeners’ delegate methods will be called back and process messages. This is a relation of n to n. I defined a universal method to response events, void announcerOnEvent(string eventName ,id sender, List userInfo). Of course, defining a single instance of message bus is also a good and simple way.

4. A studio controller and good inheritance

A studio workflow decides this controller’s life cycle, and the below flow chart shows the common workflow of most studio types.

Meanwhile, the these steps of workflow should be divided into unambiguous classes contained in a good inheritance. Every class has its clear duty. 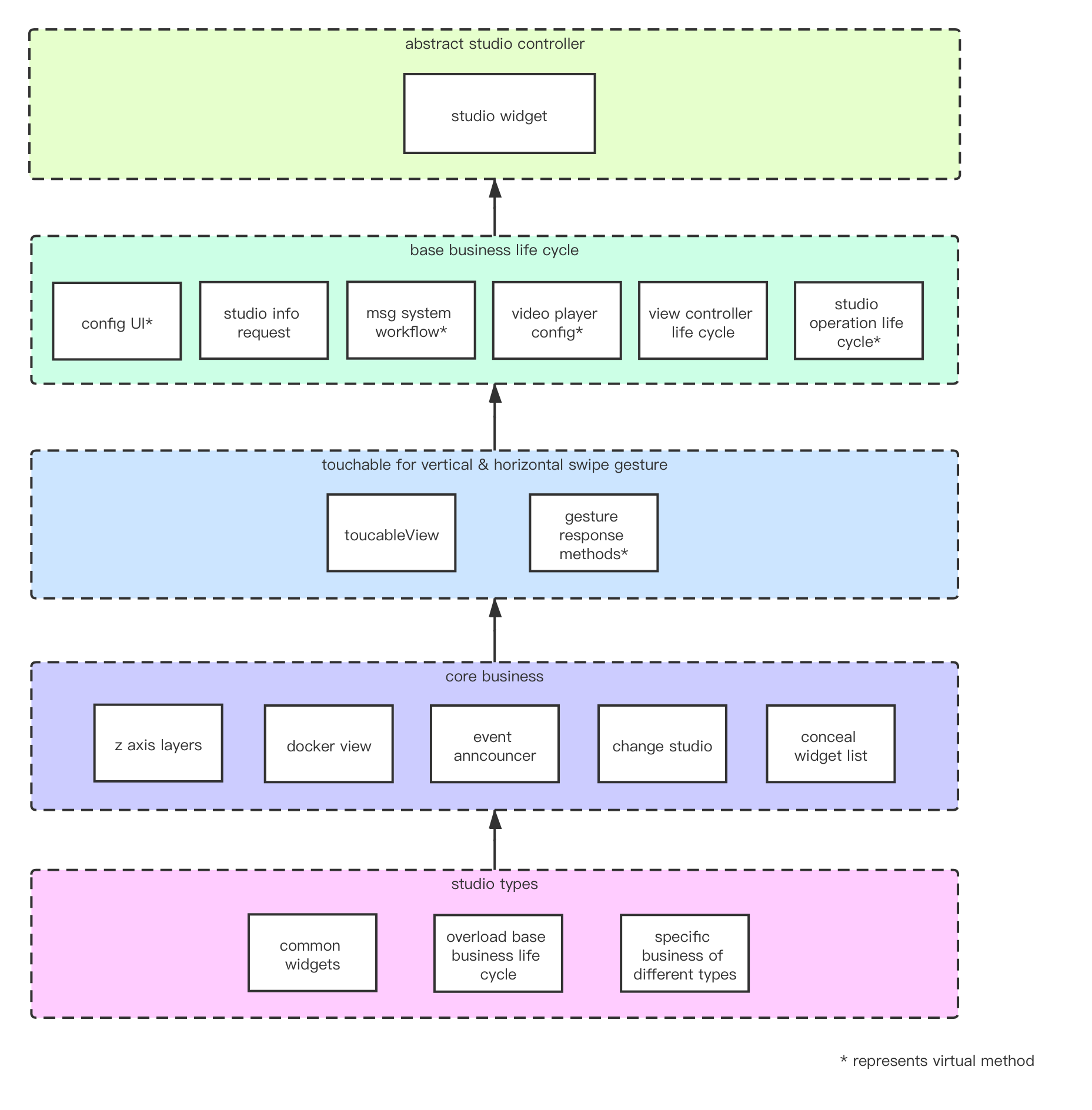 The root class of studio controller has only one studioWidget as root view. It’s like a canvas on which entire tree structure of widgets is put. Additionally, it’s added in the View Controller’s view so that the studio also could be set as the part of page but full screen.

The base business class claims main life cycle of studio, and adapts a lot of virtual methods for business group overloading. These methods are the ruled timing provided for developers. For example, there are some studio operation methods that define the timing of load studio, will leave studio, did leave studio. As well as the group members could flexibly consider to use which msg system or video player kits.

The core business achieves some common functions based on above classes. The Z axis layers are defined in this class so that the widgets could be added into studio in this class. Developers, otherwise, could conceal some widgets that don’t met their demand, just need to put the widget’s level in a concealing list.

The basic business group could inherit the core business class to add some common widgets for most studio types. Then, the other groups could accomplish own studios types based on this architecture.

This graph reveals the relationship among different modules:

This is UML graph: 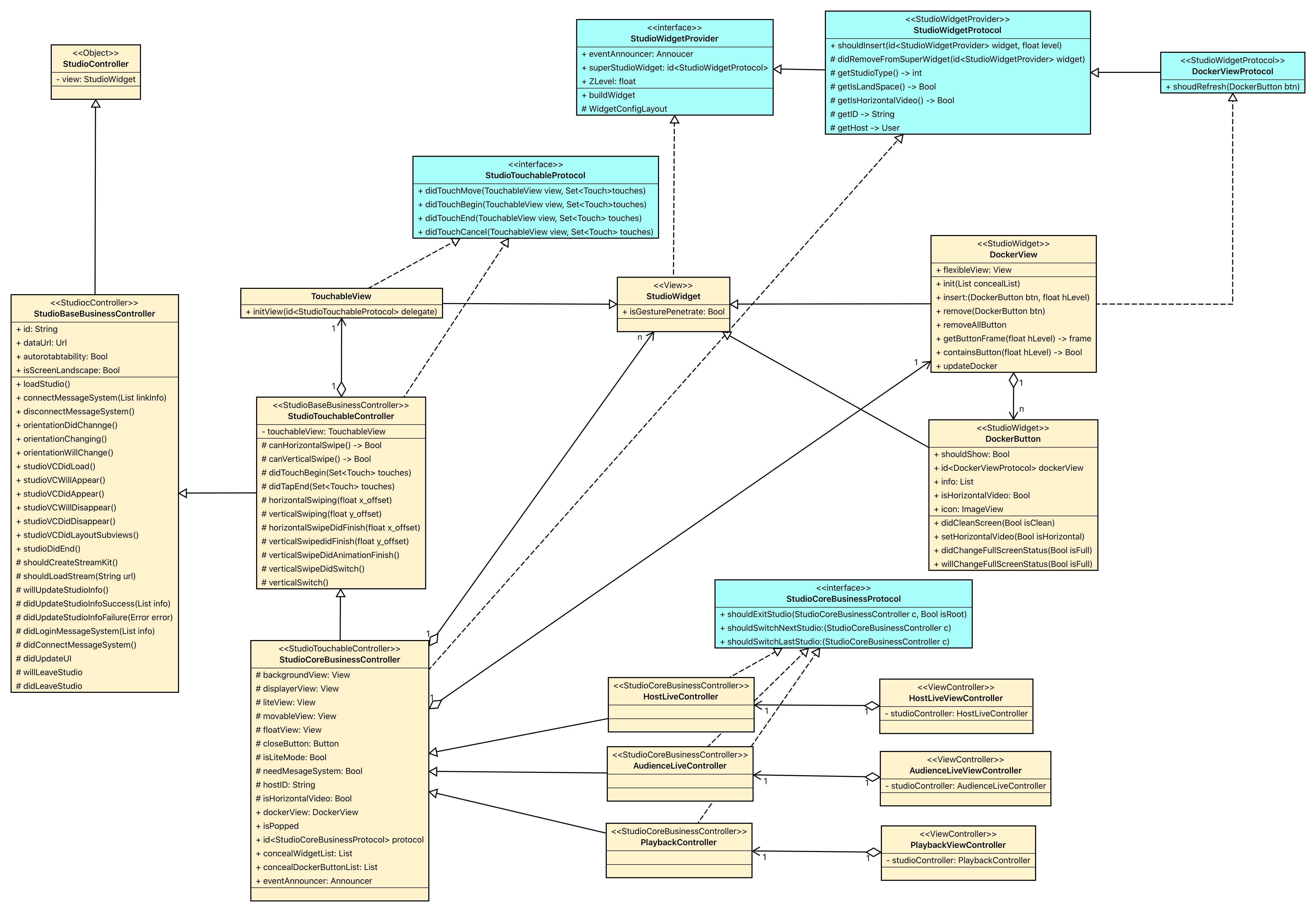 How to abstract an universal model of widgets and comprehend the core of a studio are the key of the design. A good interface could uncouple the logic between studio and widgets. The groups just need to concentrate themselves and their business shouldn’t be impacted by others logic. Besides, the studio should be a controller to manage the relations among widgets and between widgets and studio in a MVC pattern.

The outcome is incredible, the code lines of ViewController decreased from more than 20,000 to 246. Moreover, the new features can integrate it effordlessly and developers can easily debug and make logs.

However, this architecture still has many problems such as performance and some detail of development isn’t considered, for our team needed to rapidly shift to new architecture in short time. Indeed, it has much space that could be optimised.